It seems I’ve introduced an annoying bug into some Phoebes that shipped recently (some group 1 orders). The symptoms are:

This is triggered randomly, typically when the supply voltage is unstable (so during power-up or power-down) and will not go away on it’s own. Can’t be fixed by reflashing 3.6 FW.

Do you already have the issue? If not, start RMENU and press C button to see what FW version your ODE has. If it’s less than 4.0 then it won’t happen to you.
If it is 4.0.0 there is a good chance you will eventually ecounter this problem – you don’t need to do anything right now but I’d recommend fixing it anyway, sooner rather than later.

If you already have it or want to fix it before it happens:
Download the FIX FW file and the 4.0.1 FW. Prepare a card for FW upgrade, read about the process on my Updating Phoebe page and be sure you understand the instructions. If not, ask first.

1) Flash the _fix FW, turn your console off after flashing. Remove the SD card and any Saturn slot carts you might have installed.
2) Turn the console on, without any card/cart inserted. It might not show the opening animation but it will go into the Saturn BIOS menu eventually. Turn console off once it does.

DO NOT turn it off until you get into the menu, doing so might brick your ODE.

3) Put the 4.0.1 FW on the card and flash that. Once it is done you can use the console again and the problem should not return.

Few things to note:
– The 4.0 series can’t be downgraded to anything lower than 4.0.0
– To prevent people from flashing just the 4.0.1, without the fix, it will not work unless it detects the fix being applied previously.
– You don’t need to upgrade from 3.6 to 4.0 – but if you want to, you have to apply the fix first.

The only difference between 3.6 and 4.0 is I’ve updated the bootloader so it’s much faster now. This is a backport of DocBrown code and allows flashing much bigger FW files in reasonable time.

Sorry for all that but my consoles didn’t trigger the bug (yet) so I never caught it in testing. And again, if anything is not clear ask first.

Seems like everybody is ditching their Intels, with new security issues found every day. I got into that mood as well and decided to retire another i386, a DX this time. Obviously it wouldn’t be any fun if it wasn’t soldered to the motherboard 🙂 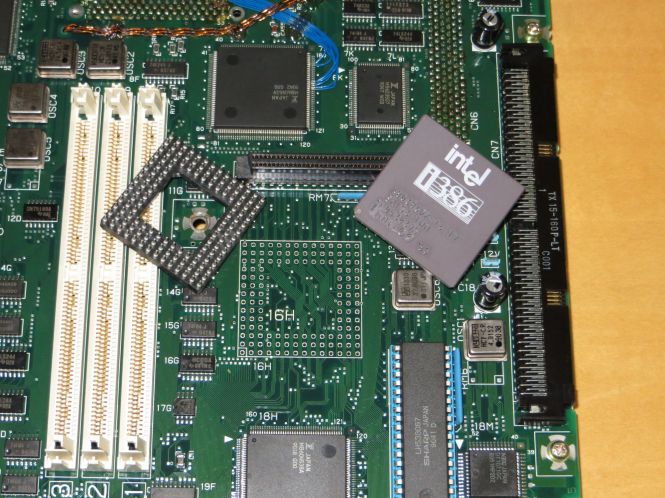 And the replacement is a TX486DLC, another Cyrix in other words. I had to write my own cache configurator for the different memory map a full 32-bit Towns has, but I’m happy to report that both the CPU and the program work fine.

Benchmark results are pretty much identical to the 486 Marty, though this CPU doesn’t have a clock doubler so it’s still a 16MHz system. I know some people opt to change the clock generator to overclock it a bit but I decided not to. With cache enabled and possibly RAM timing tweaked it’s plenty fast for that machine already – twice faster than the 386 in fact.

I’m almost done shipping group 1 Phoebes so now I’ll have a week or two to fully dedicate to DocBrown. BTW, another Rhea batch will be ready soon as well, as usual watch the blog for ordering window announcements.

There had to be some page caching issue that, coupled with the massive inrush of orders since I gave the exact opening time, caused way more orders to be accepted than I have stock. WAY more.

So, emergency procedures are now in effect. I will need days to process the emails and weed out duplicates and send confimations. Note that some providers tend to block me since I send out bulk emails – if you don’t hear from me before next Saturday assume your order didn’t get through. But keep an eye on your PayPal account just in case.

The orders will be split into 2 groups. The first will ship in 1-3 weeks, the second will have to wait for more devices – which, considering the weather, may take up to 2 months. So here is your chance to prove that you can indeed sit patiently on a long waiting list. You’ll know what group you’re in once you get the confirmation. Which BTW you should read, it’s not  just a “You got in” email.

Speaking of patience, I did a long list once so I know what’s in store for me. I’m going to make this clear – you bother me for no good reason, and that includes “Is it ready yet?” questions, and I will eventually get annoyed enough to do something about it. Most likely I’ll just cancel your order and ignore you.

And, as I’ve explained last time, all the people that didn’t do their job and check their Saturn type properly before ordering will be penalized by being moved to the end of group 2 orders.

Phoebe orders will open this Saturday at about 11:00 Central European Summer Time. I expect the devices to be ready in 1-2 weeks but do note it’s the middle of Summer here and it’s hot. 30C during the day doesn’t exactly motivate me to work faster.

DocBrown FW seems to be finally working with the security changes I introduced so now I can plan the actual shipping. Due to the weather though it will probably wait untill Phoebe is done.

Owners of the pre-order DocBrowns, I will contact you in a week or two with a customised FW upgrade for your devices if you want to use the software menu. Again thank you for your patience.

UPDATE: I forgot to add this: Last time there were A LOT of people who figured they’d just fill in the order form first and check their actual Saturn type later, and email me to “correct” it. This is not how it works. Not only I get a lot of emails that I have to process and reply to, I end up with Phoebes that I need to reconfigure and retest. So from now on you will get your Saturn type right or I reserve the right to move to the very back of the list and even remove you if I run out of the specific type you need. You were warned.

UPDATE 2: Phoebe orders are now closed. That was unusually fast. I went to splash my face now I have twice as many orders as I have stock… What to do.